It looked just for a while that our annual visit to Puerto Banus was not going to happen. Kate had her New BF to consider and was working on contract so would not get paid for holidays and I was up to my eyes with everything as usual. But the need to get away eventually got too much.

We were also put under pressure when our friends from the Beauty Salon http ://www.thelaurelsbeautycentre.co.uk told us they were going and were pressing us to come with them. It did make a more attractive prospect.as mother and daughter we get on well but the extra company was always welcome and their mother and daughter combo evened up the odds. Mind you neither Kate or I fancied lying next to Court on a beach she was simply stunning in a bikini.

So on impulse we booked a short trip just three nights. We flew out from Luton at 6 am and despite the early morning I still downed a double gin and tonic before boarding. I bloody hate flying. No sooner do I think I’ve got my fear under control when we have a bad flight and I’m back to being a gibbering mess. So with my stomach wondering what on earth was going on I buckled up and breathed deeply.

We were flying with Monarch who seemed to be a slightly more efficient lot. The captain with a very proper English accent spoke some soothing and reassuring words and I relaxed a little. In any event the flight was as smooth as a babies bum!  and we landed on time. Dragging our suitcases behind us off we went into the Marbella sunshine. Fabulous!

Our usual English ex pat Clive who does airport runs picked us up and off we go. Clive gives us all the latest Spanish gossip and an up to date weather report as we make the 40 minute journey to our Apartment which was nice with lovely views far out over the sea. The sun was blazing down on our heads as we went to the supermarket to get supplies. Then it was off to the beach for our first paddle.

After catching some rays we headed back to the apartment for a bite to eat and a little snooze before our first night out. I sat out on the balcony with a cup of tea and my book My year of dating dangerously by Monica Porter. Monica had hit the headlines as a 60-year-old Cougar. Her book had glaring similarities to my own and I found myself getting irritated. She was a journalist so had connections so no problems getting a book deal for her.!! However she didn’t go into the ups and downs of the bedroom like I had. The sexual content was very limited and maybe a step too far for a sexagenarian! But of course she had a flurry of publicity and with all the media attention would have sold thousands..damn it! As the book progressed the similarities kept on coming ..an Irishman an Aussie..Willy pictures! Saucy texts..Grrr …my book of course had been published two years before.

But I still think the Queen Cougar Wendy Salisbury who wrote Toyboy Diaries had the edge. Her book was both funny and honest .She left nothing to the imagination.. and hats off to her it made a far better read. Anyway back to Banus. Kate and I retired for the usual afternoon nap and when we got up two hours later the skies had clouded over and it was raining. Great! Our first night out and we needed an umbrella! The other girls were flying in later so it was just the two of us. We went to all our usual haunts Sinatra’s, News Cafe and Lineker’s. But as the skies opened the evening became a bit of a damp squib!

I had to give it to the beach sellers they were there like magicians in a flash with bundles of umbrellas at 10 euros a throw.. never missing an opportunity! While I was buying one I spotted a couple of familiar faces. On one of our first trips we had chatted to a couple of gorgeous Lineker barman . The bar staff were always fit. Stunning girls and hunky guys. It was company policy no doubt. I pointed them out to Kate. One of them who we remembered was called Dave was particularly  handsome. But as I studied them from a distance it was clear that the years of working in the hedonistic capital of Spain had taken its toll on them both. The years of drugs, drink and debauchery clearly etched on their faces.. sadly. Deciding that the rain had won we got a cab back to the apartment for the inevitable crisp sandwiches.

The following day was even worse the dark clouds gave way to a spectacular storm. Nothing else for it but to stay put so having checked in with the girls who were hold up in their hotel Kate and I sprawled on the bed with a pile of magazines and watched the drama in the skies unfold through the massive panoramic windows. It was still warm so we had the doors opened and were treated to the strains of piano playing from an adjacent apartment. The English owner had obviously bought a baby grand with him. We found his playing strangely soothing and it was to prove a very pleasant addition to the location in the coming days. We found his tinkling rather hypnotic and often fell asleep listening to strains of You must remember this..a kiss is not a kiss…

The sun broke through in the afternoon so we decided to stay poolside which was very pleasant . We arranged to meet the girls for dinner at a nearby restaurant called La Sala.http://www.lasalabanus.com/ We booked a table and strolled down in the evening sunshine to find the girls at the bar. The place was buzzing. The menu was extensive and with so many things to choose from it took us ages to decide. But we were quick to order a bottle of Champagne to start the evening with a bang. The food was delicious the service excellent and the music fab! The clientele were also entertaining.

People watching in Banus has always been rewarding and this place was no exception. The women came in clutching Chanel handbags and staggering on ridiculously high designer shoes. Their faces had a symmetrical similarities. Ironed foreheads, eyebrows waxed within an inch of their lives and overfull lips stretched so tight it was a wonder they could speak. Not that I’m against any of the treatments they had so obviously succumbed to, having had most of them myself. But somehow here they had taken theirs to such an extreme level they all looked like they were from the same gene pool. 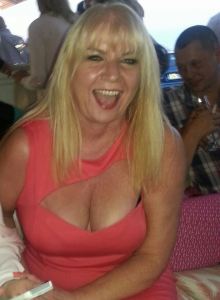 We had a great evening and the next day with the sun shining we went off to the famous Nikki Beach. This divine place rather like an oasis in the desert was peaceful and picturesque . We paid to lay in true girly bonding style on a large bed (Although neither of us wanted to lay next to the gorgeous Court) and enjoyed a beautifully constructed lunch up in the eves with views overlooking the ocean. It was bliss. This was followed by an afternoon nap at the apartment accompanied by piano playing of course and a lively evening of drinking and socialising with people we would never see again. 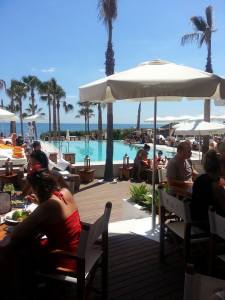 On our last day Court wanted us to go to the Ocean Club. Always up for new experiences I was keen to see what all  the fuss was about having only seen the place on the Marbella episodes of TOWIE. The beds even bigger and more expensive were in dormitory rows. The pool was enormous , the music loud, the views spectacular. We were waited on hand and foot and I have to say the place was immaculate. It was luxury at its best. Well run and kept to the highest standard. This all came at a price of course. But a   fitting end to our mini break. 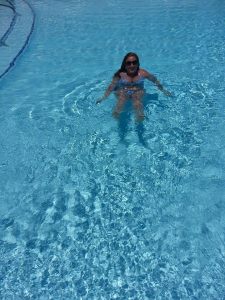 Back on the plane flying home I was coping quite well until the Captain gave us far too much flight information. “We are flying at thirty thousand feet travelling at four hundred and fifty miles an hour and oh there may be some turbulence over the Bay of Biscay”!! . Even his plummy accent did little to reassure me. I turned to Kate for reassurance she a relaxed flyer was completely hidden under my scarf sound asleep. Nothing else for it! Where’s the drinks trolley ? Ordering two large gins and one tonic which tasted like paint stripper I swallowed hard. I spent the rest of the flight feeling rather sick. Unable to relax I read ok magazine from cover to cover and talked complete bollocks to the poor girl sitting next to me. As we landed in Luton I realised that the only turbulence I had experienced was in my stomach. Bloody Pilot!

Throw Back Tuesday when Award Events were a regula

Wearing a Halo while getting Drunk! Take me back t

Lovely Autumn afternoon for a walk and its not unt

Sorry not Sorry! Just about sums up the expression

On Remembrance Sunday! Remember those who died for

Throwback to Red November 2018 and shorter hair! A

When you get the Lockdown Blues try doing somethin

Happy Halloween ! We made the best of it #hallowee

Golden Girls! Blinded by the light! Friday in the

Whose with me ? Don't let age define you. You are

The new lockdown measures in London are giving me

Jean and I clearly had a lot to say! Drunk do you

There is something about me and phone boxes #sausa

Sun going down over St Paul's on my Birthday..just

Afternoon tea with more Champers than tea for me..