We arrived back from Puerto Banus in the usual state –  worn out and depressed.   We really didn’t want to come home and could have done with more sunshine beach days and wild,wild nights.  But resigned to our fate we boarded our Easy Jet flight at Malaga Airport in the darkness and headed for a cold and wet Stanstead.

Going over the events of the holiday I smiled to myself, as usual we had a great time.  The apartment as discovered by the gingerbird was brilliantly located.  I was happy as we had views over the sea and my friend the Victory Statue was in plain sight.  We were five minutes walk from the beach and the same distance to the Strip where all the Bars and Clubs are. The apartment was fine although we were missing an oven door, a corkscrew (as we discovered when the ‘Getting ready wine’ needed opening) and the towels barely reach around my rather ample curves and had seen better days. We also had an army of ants trooping through the building in various corners. But the location made up for it all. 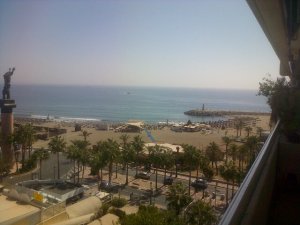 On our first night the music went on the wine (with the cork pushed in) got opened and the clothes went on and off ..along with the shoes.  Something always seems to happen to my hair in Spain it goes like a frizzy mess and despite putting spray and serum on it I still look like I’ve been dragged through a hedge backwards.  But it just has to be suffered.  Out into the night we went and off to Sinatra’s for their version of Gin and Tonics.  Strong and ice-cold they hit the spot.  After chatting to anyone we could find we made our way to News Cafe.  It was heaving and finding a small space on the floor we danced our socks off.

Copious amounts of expensive Vodka and Champagne is heralded through the Bar to fireworks and the themes from Star Wars or the A team.  These are usually carried aloft by gorgeous honed and toned barman although the next  night one of the girls tried it and she dropped the lot on the floor, a very expensive mistake.

I started dancing in my usual as if no one is watching mode and found myself gyrating with a very tall blond guy still wearing shades.  We were well matched on the dance floor and he was trying to make conversation which I couldn’t hear. He led me outside so we could talk.. His name was Chris he was American and had a real southern drawl.  He was 6ft 5 and when I asked him to take off his glasses I could see he had lovely blue eyes that were clearly not focussing.  He was stoned too oblivion.  He giggled at everything I said and told me how much he loved older woman (He was 25).  We had a bit of a kiss and a grope  but I decided that he was just too out of it and despite his protestations (he wanted to come home with me) We exchanged numbers and I waved him goodbye.  I quite fancied him but the smell of weed was really quite sickly and off-putting.   I doubt he would remember my name in the morning…either way!!. Despite his condition he phoned me later and even called me when I was back home.

The night rolled on with a lot of dancing, girly bonding and photo taking.  I tweeted a picture of us as Banus night one and got an unexpected tweet back.  A guy that had been following me for a while suddenly asked me ‘Why his friend R had not made it in to my book’.  I was puzzled I knew clearly who R was and remembered our night of passion from the year before . What I didn’t know was that this guy was a friend of his and had been following my antics and had clearly read the book.  As I scrolled down I saw the list of others that were tagged including R.  I had remembered him very well..he was gorgeous and the sex had been up there.  I tweeted back that there was still time and he would have to be in the sequel. Throwing down the gauntlet I asked the question “But was he memorable ?” I remember that his friend had given him a very hard time about me and he was embarrassed! As I have said many times the average TB does not like their dalliances with older woman in the public domain.  Even if they are really ‘In’ to older women, they like to keep it covert.  I respect their privacy always,  but unfortunately this lot had ribbed him mercilessly.

Once the picture of our first night went on twitter the game was up and the taunting started.  Having asked the question regarding his memorability I then received a tweet from the man himself with a picture..yep ! he was still Gorgeous!.  It was much later in the day when I read some of their other tweets that I realised that they were actually taking the piss.  They had written some nasty comments be it all disguised.  They were obviously in schoolboy mode and deciding that their lack of respect was not necessary I sent them a reprimand tweet and then barred them.  It would seem I had just experienced my first Troll experience  on Twitter. Ah well boys will be boys, it would be good if they  had remembered that it was him that took my number and then got a taxi to my apartment on the night in question and that as I recall,  he was so enthusiastic that  once was not enough.!!!

Marking it down to experience and parr for the course I then embarked on another mad evening where I set my sights on a very gorgeous young man from the UK, unfortunately he was with his family including his dad who I have to say was quite ‘fit’.   By now and being in full  ‘Cougar’ mode I was taking no prisoners (well maybe one).   With Irish’s departure weeks before I was feeling rampant and the need to get back on the horse.  However,  I got the idea that I was his first older woman experience.  Nice as it was it only served to remind me that Irish will be a hard act to follow if not impossible.!!!  I lost my friends who had gone out without their phones  and I  ended up alone in the apartment.  They turned up the next morning at midday having been lucky enough to find a couple of wealthy guys and gone back to their palace.  Seem like I may have missed out, that will teach me!!.

My friends were so wasted they went back to bed and I decided to go to the beach on my own. The sun was hazy and under cloud but I was confident that it would appear.  I parked myself on a bed near the bar with my book and my music.  The regular barman came over and sorted me out a table and got me a beer and I settled down enjoying the view and chatting to some Irish girls that were parked in front of me.  The  sun came out in true Spanish style and turning my bed around and taking off my bikini top I prepared to soak up some rays. I had my shades on and after about half an hour I decided to turn over as I raised my shades I saw two figures walking onto the beach.  I thought they looked familiar.  Oh No! it was my friend from last night and his brother heading this way..No! . I quickly dropped my shades and pretended to be asleep.  I felt really uncomfortable..you don’t expect to bump into people again the next day.  Not only that but here I was boobs out in broad daylight, all by myself.

To my horror they sat directly in front of me and the only way off the beach was past them.  I was squirming as I saw the rest of his family turn up all sitting three feet away. I felt naked …well I bloody was..  almost.  I guessed that although the  brother may know where his little Bro slipped off too I was pretty sure the rest didn’t.  I also knew that from previous experience the young man in question would have no idea how to handle it and would be equally embarrassed.  I lay there like a corpse for at least half an hour and managed to slip my bikini top on quietly.  By now people were leaving the beach.  I felt so exposed and being undressed and without my armour of full make-up and a glass or two , I wanted to bury myself in the sand.

Reaching for my phone I whispered for help  and  back-up . Talking in code as they were easily within listening distance. Eventually Olivia came sauntering down to rescue me.  Spotting her coming  they shouted her name and called for her to join them for a drink..they had gone into the beach bar thank god.  She passed the time with them and then parked on my bed.   Once dressed with her for cover we got up and as we walked past they again asked us to join them but my ‘friend’ as predicted looked like a rabbit caught in the headlights.  We made our excuses and went back to the apartment much to my relief.

Later that night there they were again, walking towards us!! This time we managed to greet each other normally having some clothes on must have  helped and as we kissed hello I thought how sweet he was.  Back to reality and the UK and bye bye Banus until next year.  At least with a ‘Butlins ‘ weekend on the horizon I had something to look forward to and something to take my mind off a certain Irishman…bring it on!.

Been a long time since I've had a flowery thank yo

We don't look too bad for some "Mixed Recycling" #

Oh to be planning an Ascot outfit! Loved this lime

Very proud of our Sophie who had donated her gorge

Never a truer word said and when the chips are dow

Just a couple of old flappers! Dressing up for jus

Sun in the sky you know how I feel ! Bars Open you

When you ask your drunk friend to take a photo and

A little break from the stress for Tina's Birthday

Time to look in the mirror and take myself in hand

Hats away...trying this on for size cheeky but not

Another Easter another year Bruges and friends and

A blonde bird with a blonde beer ! I remember i ha

Blue was the colour! I am in no doubt that this dr

Happy Birthday to our Chester 4 today ...he had th